Hey Crafty Friends... I'm here bring you another project for team ebrush with our awesome sponsor Latina Crafters!! I love this owl stamp! I think this little owl trio is just corky!! And they always seem to bring a smile to my face. So I decided to use them to decorate a gift bag... because who says that stamps only have to be used on cards?!! 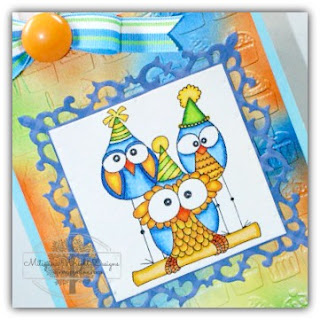 I start off with stamping my Latina Crafter's Some Birdy's Birthday Stamp with Momento Tuxedo Black ink onto illustrator paper... this paper is made for manga illustrators that generally use alcohol ink markers. It is very heavy weight and dense so it keeps the ink from bleeding so much. 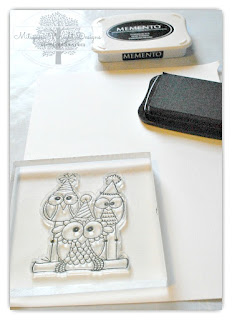 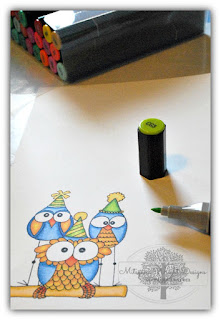 I embossed a cupcake background from a 4.75"x6.25" piece of regular white cardstock. 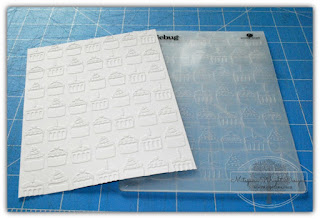 Then I ebrushed my embossed cardstock with the same colors I used to color my image (with the exception of the yellows). I did it in sections at a time starting with the lightest of the colors and using the darker toward the edges.

Here it is with the rest of the colors filled in. 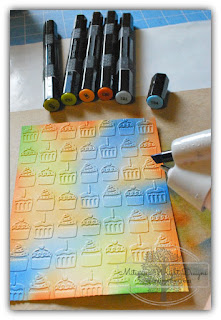 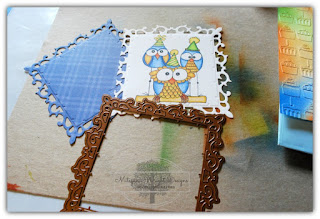 I trimmed away the scroll work off my image die cut.

I then ran it through my Xyron 3" Sticker Maker and adhered it to the blue cut out making it looked framed. 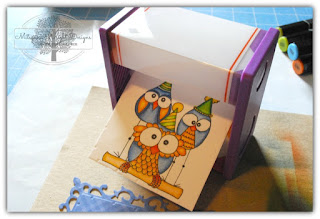 I quickly ran my ebrushed background panel through my Xyron 5" Create-a-Sticker...

And adhered it to the front of my gift bag, right above the fold line. I didn't all my hard work to get smashed in the crease of the bag. And if the recipient want to store the bag it would fold easily. 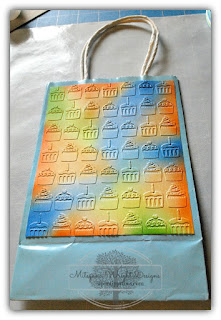 I used foam adhesive to the back of my image and added it to the front panel.

At the last minute I decided I wanted matching tissue paper to go with my gift bag... but all I had was white tissue paper... which was just fine by me!!

With the help of my decorative edge scissors, in this case a Zigzag edge, I cut the two ends of my tissue paper. I then ebrushed the cut edges with OR2. Just doing the ends gave it a nice ombre effect... and I love it!!

And here is my finished gift bag... 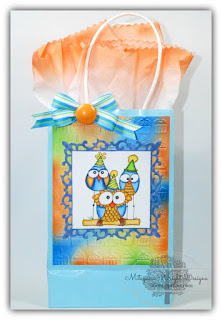 I hope you enjoyed today's project!!

Happy Crafting and THANKS for stopping by!!
~ Mitsy 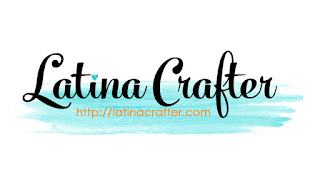